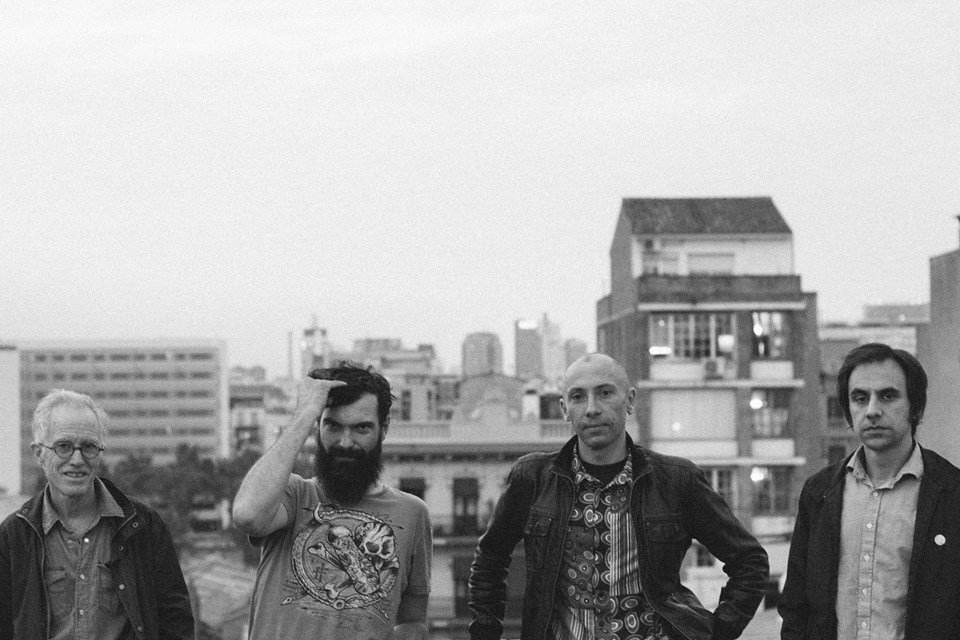 Blood Quartet, featuring Mark Cunningham (New York, USA) and the members of Murnau b. (Barcelona, Spain), took form in early 2015 in Barcelona. A project following no wave paths to its own territory of cosmic rock/post jazz/swamp metal/free trance/inverted folk, where improvisation and morphed structures gather into bright/dark psychotropic consequence.

Their first EP “Dark Energy” was released in May 2015 on cassette (Boston Pizza) and online (Jacquard Recs, Hang the Dj’s records) in Spain. Their first LP – Dark Red will be released internationally in September.

Based in Barcelona, the mostly-instrumental band plays insanely great avant-garde rock music, with Mark’s electro-Miles trumpet spread across the top like brass icing.

Cunningham has been based in Spain for many years now, and his groups there (Raeo, Bestia Ferida, etc.) have been excellent, but Blood Quartet seems like the apex of a musical quest he started with Don King, following the dissolution of his legendary NYC band, Mars. The music they play has a similar cinematic scope to the material Mark composed for his solo LP, Blood River Dusk (FTR 098). But where that album created an ominous soundtrack for living, Blood Quartet makes an explosive syncretic fusion. Angular no wave guitar lines weave through bass-heavy rhythms, and Mark’s trumpet achieves something akin to what Chet Baker might have done if he’d flipped out and gotten into the French acid scene in ’68. Light, strangely wound tones that really don’t sound like anyone else I can name.

Candid Coll’s post-tongue vocals and the synth work by both Kike Bela and Lluis Rueda completely flesh everything out in a spectacular way. The music on Deep Red starts off sounding subtle, but it grows in power with every spin, and will eventually suck you down into its magnificent vortex.